These molds should NOT be in a clean, healthy home! 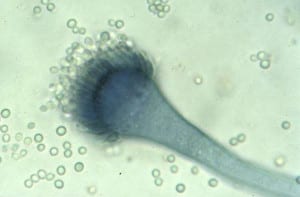 This mold has hundred of species spread throughout the globe. In a home environment, humid conditions allow them to grow on leather and cloth fabrics. Other species may also grow on grains and exposed food. They produce toxic metabolites and severe allergic reactions in individuals.

It is estimated people inhale thousands of Aspergillus spores daily, but our immune systems can fight them off — but the fungi itself can infect the lungs of someone with a suppressed immune system, a disease called Aspergillosis. There, it thrives off the warm, moist environment of the lung’s alveoli. 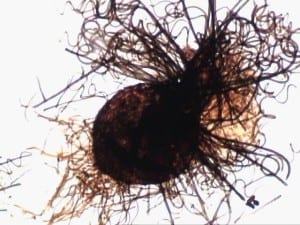 This “hairy” looking mold is considered a contaminant and a causative agent of infections. There have been cases involving immune suppression, brain abscesses, peritonitis, and onychomycosis. 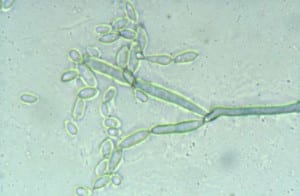 These produce olive-green to brown or black colonies. This mold has spores with a wide dispersion rate. Like most molds, it prefers a surface where moisture is present. Although not typically pathogenic to humans, it can cause skin and toenail infections and is a sinus and lung irritant. The spores are a known allergen. 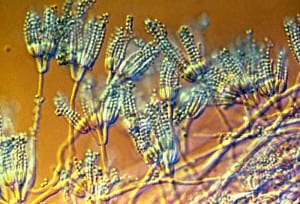 It looks like a newly budding tree underneath a microscope.

Causes allergic reactions in both skin and bronchial tests. It may cause an infection called “mucrosis” in immune compromised individuals such as the young, the elderly, or unwell.

It produces a strong musty order, as well as causing food spoiling and the destruction of leather goods. This fungus produces the neurotoxin verrucosidin as well as acids cyclopiazonic and penicillic. The liver, the kidney, and the neurological systems can all be adversely affected by this poison. Fever, anemia, weight changes, and skin lesions are common symptoms of having been exposed.

The infamous “black mold”, Stachybotrys produces some of the most dangerous toxins of molds commonly found in the household. It feeds off the cellulose-rich building material such as gypsum and wallpaper, especially where there has been water damage or high moisture readings. It is possibly linked to the sick building syndrome.

Most molds come in a variety of colors — from black, beige, white, green, brown, and so on. While not all visually black mold is Stachybotrys chartarum, the risk is definitely there.

What happens if you are living in a home with black mold?

Black mold isn’t just unsightly or foul smelling. Black mold damages the surfaces upon which it feeds and grows, reducing the structural integrity of a home. But black mold doesn’t stop causing problems there. If black mold gets into your own body’s system, it can cause extremely adverse health effects. By allowing black mold to stay and grow, you’re putting yourself, your children, and even your pets in danger. A house with mold is a dangerous and ill-suited for proper living conditions.

The chemicals black mold releases as a byproduct of its respiration and digestion are known toxins, sometimes referred to as mycotoxins. When black mold is colonizing your home, it naturally releases spores as part of its reproduction cycle. Microscopic, they drift through the air much like the cold virus; an unseen threat. These spores can be easily breathed in where they wreck havoc on your respiratory system as a foreign object; but as your lungs supply oxygen into your blood, the toxins from the black mold go with to the rest of your body. 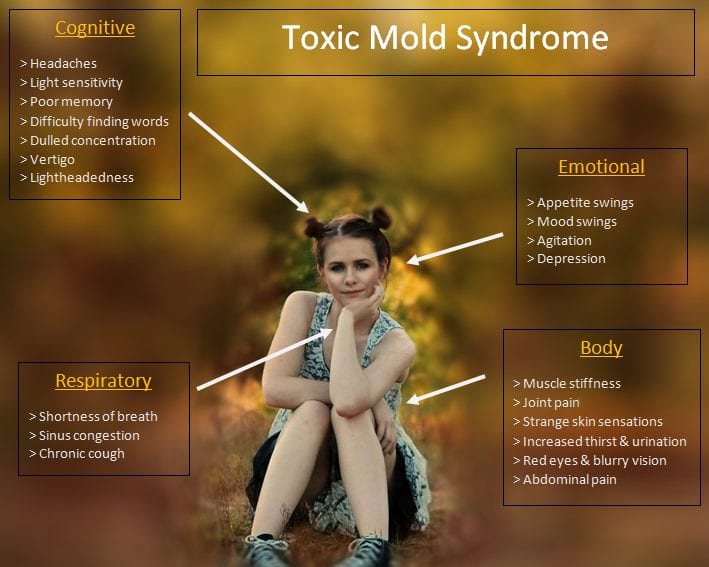 Affects Of Harmful Mold In Homes

When your body is exposed to the toxin, it begins creating illness. Headaches, difficulty concentrating, poor memory, shortness of breath, sinus inflammation, muscle stiffness, joint pains, feelings on the skin like crawling bugs, abdominal pain, are some of the many symptoms of having contracted the Toxic Mold Syndrome. Remember, this may not just happen to you; children, the elderly, and those with compromised immune systems are especially susceptible to becoming sick.

This isn’t a mysterious disease; many clients come to Dry Ease Mold Removal saying their doctors have confirmed that their poisoning is due to mold. The obvious solution is to decontaminate the home. But a simple surface wipe isn’t necessarily going to clean your home of black mold. Mold has the ability to stretch “roots” far into material, meaning one mold spot could simply be an indicator of a larger colony hidden away. Mold also loves the minerals and dark, damp, quiet space behind walls that sheetrock and gypsum board provide. You may feel your home is dry, but mold can thrive off moisture we cannot superficially detect. It is imperative that you remediate with a professional mold cleanup company such as Dry Ease Mold Removal. We have the experience and extensive knowledge to clean mold from your home and prevent future infestations.